Perfectly harmonise the energies in your body

OUR TRAINING COURSES AND CONFERENCES

The values and origin of Quant Qi Harmony’s method

The Quant Qi Harmony energy balancing method takes into account its main values: respecting each person’s body, health and well-being. Find out how this energy method has brought about such incredible results.

Our major concern is your health and well-being, respecting your energy identity.
In keeping with your energy identity, our aim is for you to benefit from a better physical and psychological energy balance, a regulated energy flow and an energy harmonisation of Qi, yin and yang, Chinese feelings (disturbed by emotions), meridians and organs.
To bring balance, harmony, peace, relaxation and well-being into your life, we have developed an innovative method of energy balancing, complementary to medical treatments.

The energy balancing Quant Qi Harmony’s method has benefited from the 45 years of research by Gérard Fiches (General practitioner, acupuncturist, passionate about quantum physics, biology) who wanted to supplement the therapeutic action of the drugs on the disease, by an energetic balancing of the patient and the sick organ.

Gérard Fiches has set himself the objective:
The Quantum energy balancing of the patient, the disturbed organ, the disease.

Passionate about quantum physics, biology, mathematics, acupuncture and Traditional Chinese medicine, music, GF knew that our body is made up of quantum particles vibrating at precise wave frequencies, assembling to form atoms, molecules, carbohydrates, fats, proteins, DNA, cells, organs, and that it was the same for the acupuncture meridians, the organs, the cells. All these elements vibrate constantly. Through his research, he decided to study these vibratory frequencies, to isolate the vibratory frequencies of each of these elements, to translate them into a sine curve to gather them on a specific image of each element : "The Frequency Code ". This allowed it to study the physiological energetic functioning of the body, organs, cells, meridians with unequalled precision (currently he has built more than 6000 frequency codes). He observed that cells, organs expressed in physiology perfect consonants and harmonious chords, while in pathology a sick organ expressed a disharmonious, dissonant and toxic chord. Subsequently GF looked for a way to regulate the frequency activity of the sick organ, he studied the resonance frequencies of some 300 precious and semi-precious stones, he selected stones whose resonance frequency allowed to regulate and harmonize the frequencies of activity of all these elements, Yin, Yang, DAO, Qi, meridians, Chinese sentiments, resulting in a complete energetic balancing of the patient.

Gérard Fiches had achieved his goal:
To be able to balance a patient and a disturbed organ, in addition to medical treatment.

GF abandoned general Medicine in 1983, to perfect its new method of quantum energy balancing of the patient and the disturbed organ: Acupunture and quantum frequency medicine.

In 2007 GF retired as a doctor to develop all his activities in the field of energy: research, exploration of the energetic field of the human body and its balancing, the preparation of energy balancing patches specific to each health problemtrainings, conferences and the writing of books.

A STEP FORWARD IN PERFORMANCE

In 2007, this research made it possible to identify and record pulse changes during energy check-ups. This marked a major step forward in the history of energy medicine, putting an end to controversy surrounding pulse-taking and its subjective nature. It was a world premiere.
1st Test performed: This plot of the Finometer Pro (cardiology device) shows the amplification of the Pulse (RAC+, VAS+) during the neutralization of a major allergy crisis by code and reverse allergy Code (neutralization Code). The patient refused any treatment to participate in the test, net improvement in a few minutes, followed in the hour following a gradual and total disappearance of any allergic event (eyes, Nasopharynx, throat, bronchi). 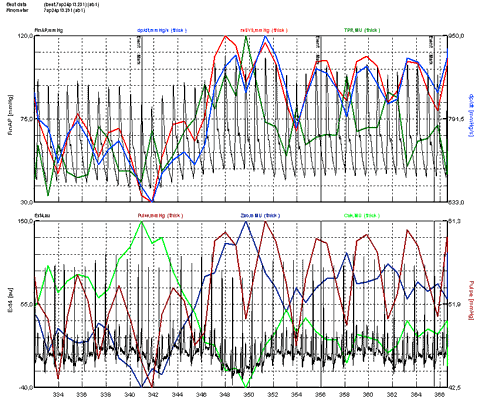 To find out more, take a look at our brochure "Identifying and recording pulse changes"

Gérard Fiches had observed that each disease was the culmination of a specific imbalance: the same disease, the same imbalance. To balance a health problem, he had the idea to build an energy patch with an image (3cm in diameter) collecting the small frequency codes needed to balance a disease. The image of the energy patch applied against the skin sends information of harmonization of the patient, the sick organ, the meridians and feelings, of a disease, of a possible infectious agent. In addition to the medical treatment.

In 2009, during the outbreak of influenza A/H5/N1, pandemic threat, in the absence of vaccine, the lack of means to combat this scourge, and the disarray of families, Gérard Fiches made available for free download a suitable energy patch. This energy patch stimulated the natural defenses against this virus. It was enough to download the image of the patch, to print it at home on paper with its printer, to cut the image and to apply it against the skin to stimulate the natural defenses against the virus. Everyone could benefit from it freely.

Gerard FICHES has discovered the typical energy footprint of a virus or prion (infectious protein) in many diseases of unknown origin:
His main discoveries include:

“... Researchers point out that it is possible to detect the same electromagnetic waves from plasma from people with various infections and even non-infectious chronic diseases such as Alzheimer's, Parkinson's, MS (multiple sclerosis) – suggesting that these diseases also have a viral or bacterial origin. “

Click here to see our range of energy patches.